Daily commutes are no fun. Plain and simple. However, if you have good music to listen to it can make all the difference!

At the moment my daily commute to work is averaging about an hour to an hour and fifteen minutes one way. It is VERY exhausting to say the least. 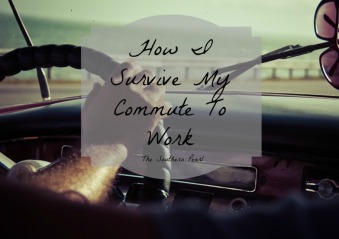 Why is my commute so long you ask?

Around the first of January (2016) my husband and I moved from our small rural town of Booneville, KY to what my husband calls the big city of Richmond, KY. Times were hard and my husband was unable to find a job where we lived after he lost his last year. Jobs are scarce in small towns…especially ours. We didn’t want to leave but we had to do what was best for our family. He was offered a job at a company in Nicholasville and loves it! The move was something that happened so quickly because my husbands commute was about two hours one way!!! He was leaving at 5 a.m. and not getting home until after 7 p.m. depending on traffic. This is not something we could let go on for long…it wasn’t good on him or his paycheck.

I had actually lived in Richmond for about five years before returning to Booneville when my stepdad passed away in 2012. So I am very familiar with the area and would be lying if I said I didn’t miss the conveniences the city had to offer.

I am currently driving back and forth from Richmond to Booneville four days a week for work until I am able to get a job closer to the Richmond/Lexington area.

Without music my long drive through the Eastern Kentucky mountains would feel like it would NEVER end.

In our house there are only two radio stations we listen to….K-LOVE and Air1. Both stations only play Christian music. So not only do I get to hear uplifting and spiritual music I also get to hear words of encouragement and faith.

Besides  the music I LOVE to listen to the K-LOVE Morning Show with Craig, Amy, and Kankelfritz. Yes if you unfamiliar with the show or station his last name is really Kankelfritz. I enjoy listening to this show because I still get to stay up to date on what is going on in the world but I don’t have to worry about the show taking an unexpected, inappropriate twist.

I love the The Encouraging Story of The Day segment of the show. It’s where they tell a story of where God has done something/blessed someone in someway. It’s a good reminder that God does listen and he does answer prayers.

Now once I actually start driving through the mountains (about 35 min into my commute) I lose all radio service. That is when I have to result to listening to the music on my phone (which is mostly Christian music as well).

On the radio you can hear a wide range of songs, however, on my phone it is limited to what I have downloaded.

My favorite tracks on my phone include:

If you enjoy listening to contemporary Christian music I suggest you listen to these songs! I love them all and they make my commute so much easier!

Give them a try and see if they make your commute better :).

Do you have any specific thing you do to make you commute to work better? If so, I’d love to hear about them! Comment your ideas below.